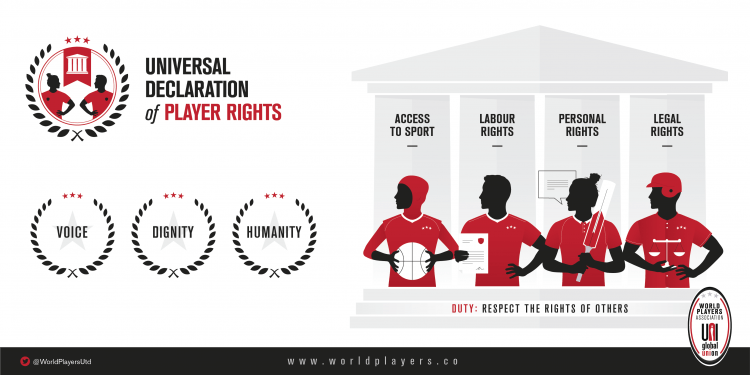 Washington, D.C. – The world’s leading player association executives collectively representing more than 85,000 players and athletes announced a Universal Declaration of Player Rights (UDPR) today in Washington, D.C. The Declaration addresses the persistent, systemic and long-standing violations of players’ fundamental rights in sport throughout the world. It is the first framework ever to explicitly articulate the internationally recognized human rights of athletes globally.

“The Declaration fills a glaring gap. In the rule books of world sport there are thousands of pages detailing onerous obligations, but not one that coherently spells out the fundamental rights of the athletes,” says Brendan Schwab, who heads the World Players Association. “The result has been the widespread and sometimes tragic violation of the worlds players. The Declaration makes clear that the rights of players can no longer be ignored and athletes must be able to quickly access justice to ensure their rights are protected, respected and upheld.”

AthletesCAN, Canada’s association of national team athletes since 1992, was in Washington, D.C. as part of a gathering of the world’s largest and most influential player associations.

“Sport is among the ecosystems encountering the challenges of today’s world, while also having its own unique issues which threaten to undermine its integrity,” says Dasha Peregoudova, AthletesCAN President. “At the same time, sport has the unrivaled ability to set standards for a world where dignity, equality, and excellence rooted in diversity prevail. To continue to do so, it must first and foremost protect and celebrate its main stakeholders, the athletes,” she adds. “The rights of athletes need to be recognized in the administration, participation and delivery of sport. AthletesCAN is proud to be part of this extensive collective effort to embed fundamental human rights into the fabric of sport, and we believe the Universal Declaration of Player Rights is a foundational piece necessary in achieving this objective. We commend and support the WPA’s work on the UDPR, and look forward to building a stronger athlete-centered sport system in Canada and across the world. We believe this work will not only benefit the athletes, but also their communities, supporters and the sport movement at large.”

The Declaration was developed over the last two years by the more than 100 player associations affiliated to World Players and has undergone a thorough review process by human and labour rights experts. It reflects generations of organised players experiences and incorporates recent feedback from thousands of players provided through wide-ranging surveys conducted by player associations. The Declaration is also firmly anchored in international human rights law and core International Labour Organization standards.

“Athletes around the world should not have to accept violations to their basic human and labour rights just because of their profession. We should want athletes to be involved and ready to stand for important issues in their community in the same way everyone should want athletes to have the same rights to fairness and safe working conditions of other workers. Unions are the only organizations to make this a reality and we are proud to host our brothers and sisters from across the world for this important meeting,” says DeMaurice Smith, Executive Director of the National Football League Players Association (NFLPA) and Executive Committee member of World Players Association.

Since its inception, the World Players Association has continued to amplify the athlete voice and is working in a number of policy areas which are impacting athletes globally. Recent highlights of this work include the World Player Development, Wellbeing, Transition and Retirement Standard, Paris 2017; the Declaration on Safeguarding the Rights of Child Athletes; the World Player Rights Policy; and the Gender Equality Principles.

“As the collective voice representing over 2500 athletes from more than 60 sports in Canada, AthletesCAN has been working with the World Players Association since 2015 to further develop best practices in Canadian sport in the area of athlete representation and rights within governance and culture,” says Ashley LaBrie, AthletesCAN Executive Director. “The athlete voice is essential to the development, delivery and evaluation of a strong sport system and with more than 50 collective years of experience, the WPA is world leading in this important space.”

About the World Players Association

The World Players Association was formally established on 5 December 2014 an autonomous sector of UNI Global Union (UNI), which represents 20 million skills and service workers in 150 countries.